I’ve been to a few baseball games this year. I’ve kind of sworn off of NFL games, but not because of Colin Kaepernick. It traces back to the arrogance of the NFL, willfully ignored the concussion issue, and I could go on about that.

At every Minnesota Twins game, they have a veteran raise the flag as the national anthem is played. The veterans I love are the WWII and Korean War guys. They’ve been through so much and now are toward the end of their lives and it’s an amazing way to honor them. It’s a great way to honor any vet.

I stand, take off my cap, sing the anthem, and cheer wildly for that vet after the song is over. Almost every time I’m choking back a couple of tears.

I’ve grown up loving the flag. Truth be told, it’s the flag itself and not all the gawdy other things we do with it to design clothes, bikinis, etc. Talk about “not honoring”…

But before the honoring of the flag at any sports event and before any national anthem and before any pledge of allegiance stands the First Amendment of the Constitution.

Congress shall make no law respecting an establishment of religion, or prohibiting the free exercise thereof; or abridging the freedom of speech, or of the press; or the right of the people peaceably to assemble, and to petition the Government for a redress of grievances.

The whole idea of freedom of speech isn’t aimed at the speech you want to hear. It’s aimed at the speech you don’t want to hear… not if you’re the one in power. It is the protection of the voice that needs to speak so others can try and understand from time to time that something may be wrong. There may be another voice, another opinion, or another way to look at something.

And that voice has the right to say it.

The First Amendment was put in place because those living in the colonies at the time knew the fear of speaking up against an empire. They knew dissent could cost them their jobs and possibly their lives.

The First Amendment was put in place so trembling voices could still speak and someone wasn’t there to say (and I’m going to be very plain here, so brace yourself), “Your ass is fired!”

The First Amendment is there so the majority doesn’t get to bully the minority.

The tragedy of our current culture is we have failed to understand the basics. We’ve made dichotomies that aren’t there. The narrative of Colin Kaepernick has moved from a protest to make people aware of injustice to, “they hate veterans.” A new narrative makes us feel better about yelling at the guys kneeling.

Here is the first observation I want to make generally about all this mess. (And I honestly don’t like doing this because yet again I’ll have people mad at me and not tell me.  We won’t have discussions. They just quit talking.) At any rate, I’m so stirred by our awful reactions, I need to make two general observations. The first is I love standing and singing the anthem at a game. I just do. I love honoring veterans at the Twins game. Even though I never served and I try to live out pacificism as a belief, I honor those who put themselves in harm’s way so I can have my belief.

But as I stand, I also know the First Amendment allows Colin Kaepernick and other athletes to kneel. And I honor that as much as I hope they honor my decision to stand. THAT used to be America, anyway. In those decisions, I have to learn to listen. I want to hear WHY Colin Kaepernick decided to take a knee. I then listen to my African-American friends so I can learn why there are certain feelings.

Along with this general observation comes my profound disappointment in all of us as whites. We get mad when protesters block highways. We say, “That’s disruptive and illegal.” THEN, we get mad when they simply kneel and try to silently make a point. I mean, what is wrong with us? We keep moving the goal posts and still insist a dissenting point kick the field goal! Come on!

Here is my second general observation. I have buried it deep because this is where I really lose people who will just be mad and never talk to me again. It’s about us as white, conservative Christians. This is about two Christian athletes who choose to kneel and our responses to those actions. One is Tim Tebow. We got mad when the media made fun of his kneeling in prayer. Rightfully so. But then we have Colin Kaepernick. And I’m going to say this: we have a white athlete who bows in prayer and a black athlete who bows in prayerful protest. But Colin is somehow wrong and Tim is somehow right.

It’s a simple question: Why can’t we honor both Christian men in their decisions? (And, yes, I just did accuse us of what you thought I accused us of.)

I’ve gone from blog post to novella to just plain meddling. I think I’ve done enough to drive even more of my “friends” into angry silence. So, I quit here. 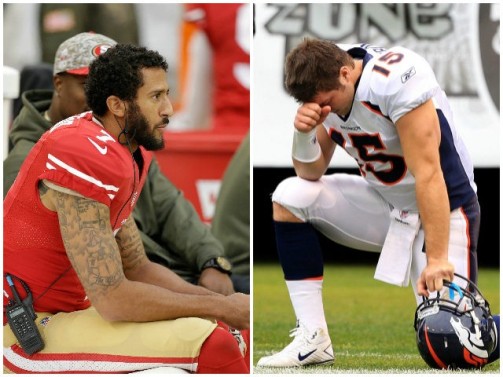 2 thoughts on “The Flag, the Anthem, the First Amendment”