The prayer of forgiveness is the dangerous prayer. It is the most shocking action taken by God.

Instead of forgiveness, our generation has been taught the vague notion of tolerance. The is, at best, a low-grade parody of forgiveness. At worst, it’s a way of sweeping the real issues in human life under the carpet. If the father (in the story of the Prodigal Son) had intended merely to tolerate the son, he would not have been running down the road to meet him. Forgiveness is richer and higher and harder and more shocking than we usually think. — NT Wright, The Lord and His Prayer

Jesus came and made forgiveness an action. He made it real time. Those who received the forgiveness of God were then given a shocking task: practice it on others.

“Forgive us our trespasses as we forgive those who trespass against us.”

Thank God we don’t pray, “Tolerate us as we tolerate those among us who just aren’t thinking the same as us!”

Forgiveness is powerful and it has been extended to us. The task is to now extend it to others. 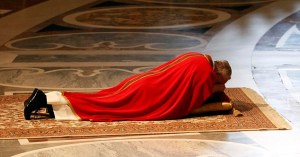