I am making my way through a great little book entitled Evangelical, Sacramental, and Pentecostal: Why the Church Should be All Three by Gordon T Smith. I wish I had known sooner it was published by IVP because I would have asked them for a free copy to review! I don’t mind paying for this gem, though.

Early on the plea is simple: Why are we, as “the Church” one way or the other? Why are we strictly “evangelical” or simply “sacramental” or built up as “pentecostal”? Why do we define ourselves in strict terms to make sure we point out, “Well, we’re not that“?

Using the Gospel of John, Smith camps on John 15:4 as the basis for life in Christ.

He then goes on to demonstrate (and this is by way of introduction) that the basis for abiding isn’t just one thing. It’s “evangelical” in that we hold to the Word of God, and the written word is vital to lead us to the living Word. It’s also “sacramental” because there are the physical and tangible things around us that draw us into the presence of Christ. Most notably, it’s the Table of the Lord. There is a very physical aspect that the incarnation of Christ demonstrates to us and the sacramental is necessary. But there is also the pentecostal. John is so clear on the presence and activity of the Spirit.

Yet, we find the evangelical stream explaining themselves by framing it as “well, we’re this, but also not that.” The sacramental and pentecostal streams do the same.

With evangelical and pentecostal streams, what we really don’t want to get into is that “physical presence” stuff of communion!

Yet, Smith’s contention is that if we are to abide in Christ, John’s gospel is demonstrating this abiding feature in all three streams.

We need the fullness of the Kingdom, not partial streams that leave us with a trickle of the fullness God intends for us. 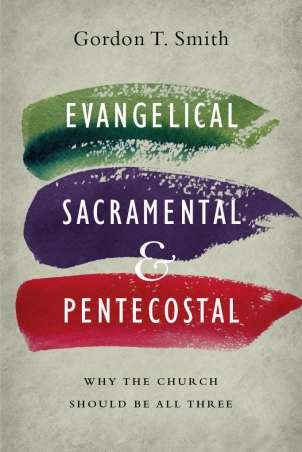