The issues of race, ethnic divides, immigration concerns, are such hot button issues.

Immediately following the events of 9/11, I immediately contacted my Muslim friends to make sure they were okay. I wanted them to know I wasn’t angry with them and I wanted, above all, to make sure no one else was taking anything out on them right away. It was in knowing these precious friends I could understand the nervousness and fear they felt in the months following 9/11.

I reached out further by organizing events to put Christian college students with Muslim high school students. The director of the Muslim school was so deeply appreciative and during the event he pulled me aside and thanked me. Then, the inevitable question: “WHY are you doing this?”

“The more we know, the less we fear,” I responded.

In our own community, the police are very pro-active in building relationships so kids don’t see a cop and have an urge to clam up, turn away, or run. The community has “coffee with a cop” days. The police sponsor open gyms at the middle school and high school. They get to know kids and kids get to know them so if a 9-11 call happens and a cop may know a kid or adult involved, they can have a bit more civilized conversation in the process and things don’t escalate as much.

Interestingly enough, it is because I know police officers and also have friends who are from the St. Louis area that also know the racial tensions in that area that I know the anxiety on BOTH sides. If we are on the outside looking in, we tend to look at “systems” and want to diagnose the “system.” If we actually know people and have relationships, we know “systems” may be part of the problem, but the situation is a lot “stickier” than solving a legislative issue.

I prefer the mess of relationships. I am weary of the ideological bombs we throw at each other. I can hunker down in my ideology and feel good about winning an argument, but at the end of the day, I’m just hunkered down with my ideology feeling good about myself. For some that’s enough. For me, the world is much richer than that. It’s messier, but it’s richer. 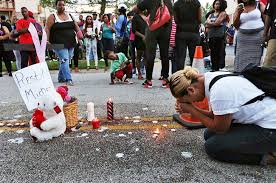 One thought on “Why do we fear relationships?”