Christians, at their best, are the fools who dare believe in God’s power to call dead things to life. That is the testimony of the Black church. It is not that we have good music (we do) or excellent preaching (we do). The testimony of the Black church is that in times of deep crisis we somehow become more than our collective ability. We become a source of hope that did not originate in ourselves. — Esau McCaulley (more HERE)

More of her thoughts HERE.

We’ve spent a couple of centuries at least trying deconstruct the work of the Cross and the power of the Resurrection. We’ve lost the ancient path.

END_OF_DOCUMENT_TOKEN_TO_BE_REPLACED

We have been recruited, through the resurrection, to go into the Father’s “business.” It is the forgiveness business.

END_OF_DOCUMENT_TOKEN_TO_BE_REPLACED

Almighty God, who through your only‑begotten Son Jesus Christ overcame death and opened to us the gate of everlasting life:
Grant that we, who celebrate with joy the day of the Lord’s resurrection, may be raised from the death of sin by your life‑giving Spirit;
through Jesus Christ our Lord, who lives and reigns with you and the Holy Spirit,
one God, now and forever.
Amen.

For this he shall live hated, be blasphemed,
Seised on by force, judged, and to death condemned
A shameful and accursed, nailed to the cross
By his own nation; slain for bringing life:
But to the cross he nails thy enemies,
The law that is against thee, and the sins
Of all mankind, with him there crucified,
Never to hurt them more who rightly trust
In this his satisfaction; so he dies,
But soon revives; Death over him no power
Shall long usurp; ere the third dawning light
Return, the stars of morn shall see him rise
Out of his grave, fresh as the dawning light,
Thy ransom paid, which Man from death redeems,
His death for Man, as many as offered life
Neglect not, and the benefit embrace
By faith not void of works:
This God-like act
Annuls thy doom, the death thou shouldest have died,
In sin for ever lost from life; this act
Shall bruise the head of Satan, crush his strength,
Defeating Sin and Death, his two main arms;
And fix far deeper in his head their stings
Than temporal death shall bruise the victor’s heel,
Or theirs whom he redeems; a death, like sleep,
A gentle wafting to immortal life. — John Milton, Paradise Lost (Book 12) 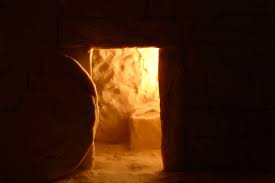 The good news of the Kingdom is quite simple. We’ve complicated it, or we’ve tried to reduce it to the wrong simple phrase. John’s gospel brings the simplicity of the proclamation of good news:

Now is the time for judgment of this world. Now this world’s ruler will be thrown out. (John 12:31)

The King has come. He wins. This is good news for those being set free (and realizing it). This is bad knows for the ruler of this world.

The implications of Jesus’ statement are far reaching and complex, but the good news? Simple.