Let me set the context again when it comes to posting something on race and racism. The “big event” for me was the shooting of Philando Castile last summer. So many high profile shootings had been boiling over to that point, but when this shooting happened in my metro area to a man who was simply pulled over for a minor traffic violation (and having a “wide nose” like a robbery suspect…) I was stirred in a way that hasn’t let up. And I can’t let it up. I pray I can’t let it up.

Nevertheless, when I bring up race and racism, there is the inevitable silent discussion that goes on (because I have had TWO people actually talk to me) about, “What about all lives? What about police lives?” So, let me reset the context by pointing you BACK HERE. (I’m fairly sure that won’t help, but I tried.)

After the acquittal of Philando Castile’s shooter, I felt this deep sorrow again. This time it was deeper. It was a crying out that longed to do something more. Somehow.

Leaders in our church agreed so they set up a community discussion on race, which we held in our coffee shop. The community showed up, including our local state representative and state senator. Terrence Talley, a youth rally/high school assembly speaker, led our discussion after we watched a documentary on the founder of Black Lives Matter.

Terrence posted this on his Facebook page before the event began:

There are few times I get to talk about publicly about being black, being a minority, being the only one a lot of times in white communities. Tonight I am honored to get the chance to not only share my story but helping others do the same. Tonight I will share about being pulled over for the most minor things. I will speak about the emails and forms filled out on my website calling me nigger. I will speak about the excuses made for apparent racism to not only me but a whole community of people. In essence I will talk about being black in America. I am honored that a church led by white people is willing to want to talk about this in their community. Nervous. Scared but willing to say #iamblack but I am not what you think.

Terrence then led a community discussion and asked others there who were people of color to tell their experiences.

There were stories that are common among people of color that I will not know. As a mom of five boys shared how she and her husband taught their boys how to kneel down with their hands up at a traffic stop, there were other people of color silently nodding.

Biracial couples told stories of being pulled over. The black husband was the passenger but asked to hand over his identification, then the white wife was asked, “Ma’am, are you here of your own free will?” Again, other heads nodded silently.

And there was hope. People of color told of how they positively engage police in our community and how they engage kids of all races, along with the parents of those kids. Just talk to each other.

I have to quit looking away. I have to speak up when staying silent is OH so easy!

May our souls be stirred… and stay stirred. 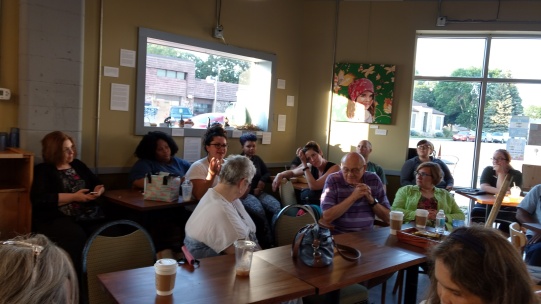 One thought on “The hard discussions on race”