We live in a new day as American Christians. There is such a challenge because there has been incredible disagreement.

Here are some thoughts from Russell Moore, Scot McKnight and Ed Stetzer. More will follow, I’m sure.

I am trying to sort through some things as well. Writing before November 8 turns out to be easier than writing on November 9. 😉

To those who voted for Trump and are elated: Win. Don’t spike. I think of that line from “The Mighty Ducks” when the boss of the law firm gave Gordon that advice after Gordon won a case. There is a tendency to lash right back out at other believers who did not vote for Trump and had legitimate issues (not “feelings,” not “emotions,” but legitimate issues) with Trump’s character and policies. Your man won. Don’t drive others into the ground for some Christianese reason like, “I know God told me…” or, “It’s time to get behind God’s man.” Make no mistake, even if I had grave reservations about Trump all the way through this election season I will STILL pray FOR him. I do not pray against him. I will not take the position I heard other “evangelicals” take for 8 years “against” Obama.
To those who did not vote for Trump: Mourn. Don’t lash out. Don’t tear down other believers who DID vote for Trump. The mistake we’ve made in American Christianity since Bill Clinton was elected in 1992 is we super-spiritualize results and use it to tear into each other. Let us find a new way.
Let us debate the ISSUES. Let us find new ways to work to SOLVE THE PROBLEM. We have issues in the economy, healthcare, race relations, immigration, foreign policy, and on and on. Let’s get after the issues and SOLVE THE PROBLEM. One example: Both Clinton and Trump talked about the nation’s infrastructure. Fantastic! Let’s solve to a problem we can all actually get some muscle behind! There is a Supreme Court vacancy. Let’s get to solving THAT mess as well.
And let us ALL pray. Pray for each other. Minimize the urge to taunt in either direction. And pray for our leaders. It’s not the easiest thing to do in this cycle, no matter who won. Let a church on its knees find a way back to our KING… and move beyond the cultural attachments that have made us so divided. 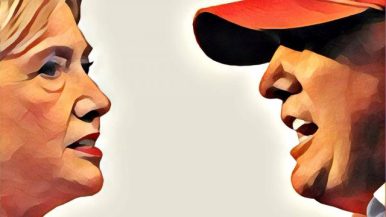