This discussion on “The Table” podcast is worth an examination.

One of the key questions proposed in this podcast is “good law.” What do we assume about “law” and changing law?

While our shallow “journalistic” coverage, only driven by our shallow American desire for, well, all things American and culturally relevant to us… and can really stir up controversy on social media… fixates on one county in Kentucky, the story we refuse to pay attention to, among so many, is the immigrant crisis in Europe.

As we allow the man with the hair problem wax elephants on “immigration” by saying, well, absolutely nothing, we are missing the larger story of a true immigration crisis. Because it is currently in Europe, we ignore it and it will be to our own detriment. We can’t connect dots very well. But that’s an easy call since the numbers of “journalists” in one county in Kentucky now probably outnumbers the actual population of the county.

300,000 is the number. That is how many immigrants have flowed into Europe so far this year. It is a 40 percent increase over ALL of last year. And it’s the first week in September.

If you want one number to explain the mass movement today, start with 60 million. The U.N. says there are 60 million people displaced worldwide — the most since the U.N. started keeping records and the most since World War II.

We are facing a worldwide crisis that we somehow can’t find the time to cover in the United States. ISIS has displaced 3 million, while millions more flee other Middle East and North African conflicts and repressive regimes.

2500 have lost their lives trying to get to freedom. Now millions are stuck in areas because Europe doesn’t know what to do, and smugglers are profiting off of people desperate to make it anywhere safe.

The numbers don’t mean anything, do they?

How about this number: ONE

One picture. A picture of a little boy’s body washed up on a shore. A picture that finally got out and around the world and made us stop for an oh so brief moment and possibly get a tear in our eye.

Five years old. Him, his brother, his mother all lost to the sea and their bodies washed up as they tried to find freedom.

The number is not 300,000. The number is ONE. One picture can turn things around. The question is this: will you let it?

Will you let a picture haunt your soul. Really. I mean it. HAUNT you.

It haunts me. I’ve had times when I couldn’t stop crying thinking of that picture. That boy. The father weeping on TV.

And I think, “What am I doing? What is MY life that I just go on about my business?”

But we all have lives to live. It’s not necessarily about dropping everything and going to Syria. For some, that may be the answer.

Yet, I am drawn again to that number: ONE.

So… what do I do? Drop everything and find a way to Syria? To Turkey? To France?

No. I’ve asked. I have honestly asked. And the answer is this: “Find the ONE where you are where you can invest in their life and their spiritual body doesn’t end up washed up on some spiritual shore.”

For me, it’s getting involved in mentoring. I’m pumped for it. I had a kid last year I absolutely loved being with week after week. I long for that again.

ONE. The number is ONE. Right where you are.

Will you do THAT?

I have walked slowly through Mark 1-4 the past few days… over and over.

There is a story of a man with a withered hand (Mark 3:1-6). The religious leaders are all standing around seeing if Jesus would dare to heal a man on … horrors! … the Sabbath.

5 And he looked around at them with anger, grieved at their hardness of heart, and said to the man, “Stretch out your hand.” He stretched it out, and his hand was restored.

Jesus was angered by their hardness. Here was a man with a need right among them and they were waiting to trap Jesus on a technicality.

It is that frustration, but I know NOT that level of anger, I feel when we talk about anything in the American Church today.

We don’t even hold our anger very long. It was just a few weeks ago those horrid Planned Parenthood videos started coming out and for awhile they finally outraged social media enough it became something of a “sensation” for about 2 minutes. We just don’t sustain a holy anger very long any more.

Instead, when something comes along that should cut our souls and call us to action… we all tend to be more like the religious leaders than Jesus.

The horrifying reality of the Syrian refugee situation came home this week with the photos of a little boy’s body washed up on a shore in Turkey. It outraged the world… for about 2 minutes. Most don’t even know about any picture yet.

We get “horrified” in a social media way… but then we go back to our trenches and lob our theological grenades. And we don’t help anyone. We don’t act.

We stand around with our Pharisaical rulers and make our judgments. From the “right” and the “left.”

“Well, those Planned Parenthood videos were heavily edited.” (Like that makes us feel better about the taking of a human life.)

“Well, that child was probably the son of a terrorist.” (So we feel better… how?)

Like the Pharisees watching the actions of Jesus, it’s all we do these days. We think we act like Jesus, but here’s the reality: we don’t even ACT. We just sit around and watch and then lob our ideologies out there on Twitter.

And for the American Church, we need to wake up with a realization: Jesus is looking around at us… all of us… self-righteous evangelicals, self-righteous liberals and progressives… All. Of. Us. And he is NOT happy.

While Syrian refugees drown, while babies are still be sliced up, while people slog around in horrid conditions of life and ACTION is needed, we’re all standing around sniffing at whoever might dare to take action because somehow, in some way, they just don’t believe something right.

There are people who just hate the idea of a Republican being nice because, doggone it, it wrecks their view of Republicans being EVIL. And vice versa for Republicans not liking a Democrat. We’re just not allowed. So we’re sniffing at each other and no action is taken.

More babies will be sliced up. More refugee bodies will wash up on shore. And the Church capable of doing SOMETHING will continue to turn their noses up at any action because, somehow, it’s not the RIGHT action. (Excuse me… the correct action. I sure don’t want any LIBERALS mad at me!)

I don’t want to “feel” justified about my political positions anymore. I don’t want to sit and feel good about my correct theological beliefs anymore. There are actions I need to take. Specific actions that may not solve a deep crisis like abortion or the slaughter of people in the Middle East, but action that none the less can make a difference for someone.

It’s awful when we can’t take action and would rather criticize because our “position” is more correct. I think how long that man with the withered hand had to suffer in that condition because no one wanted to break a rule…

Dear Lord, forgive me for my political, theological, philosophical stubbornness. It is an offense to you. You are angered by my inaction. And I understand.

Help me to ACT.

That’s the real amnesty – leaving this broken system the way it is. Mass amnesty would be unfair. Mass deportation would be both impossible and contrary to our character. What I’m describing is accountability – a commonsense, middle ground approach: If you meet the criteria, you can come out of the shadows and get right with the law. If you’re a criminal, you’ll be deported. If you plan to enter the U.S. illegally, your chances of getting caught and sent back just went up. — President Obama

The rest of his speech is HERE. 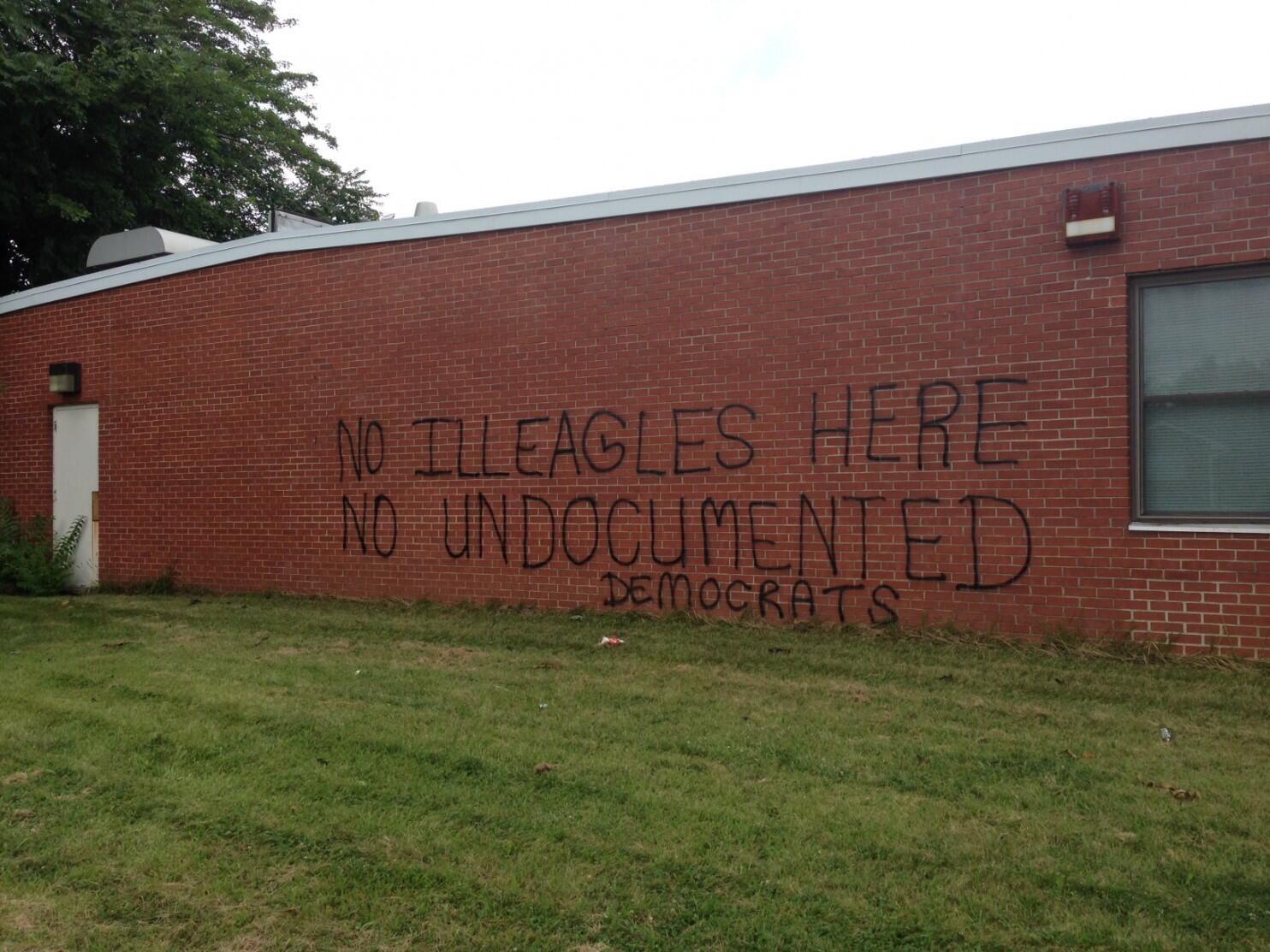 If you’re going to tag a building to make a ridiculous statement, at least try correct spelling.

What this says is, “We only want healthy eagles. No ill ones. Sick eagles are a pain to take care of.”

I agree. They should send the ill eagles to Wabasha, MN at the National Eagle Center, or perhaps the Raptor Center at the University of Minnesota. Abandoned buildings can’t care for ill eagles very well.

I was away for the 4th, so I didn’t get to post too much on the 4th, and then have the angst over why as Christians we wrestle with celebrating the 4th… blah, blah, blah…

You can find the angst elsewhere. I wrestle with those issues as well… but on the 4th I love the fireworks, the music, the fun.

When I left New Orleans to go to Mobile, Alabama on July 1, I took a cab to the airport to pick up a rental car. My driver was an immigrant from Costa Rica. He had come here four years ago, taken his ESL classes for two years at the University of New Orleans, and was now in his business program. He spoke of the hope he has for this country. He spoke of opportunity. He spoke of hard work and rising up to be anything he could dream.

One of the things I think every American should go watch is a naturalization ceremony. The one I went to a year ago was like a NASCAR rally. Over 900 immigrants were there to take an oath of allegiance to the United States. They sang “God Bless the USA” and the Star Spangled Banner. They said the pledge. They swore their oath to the U.S.

I’m fairly sure even a Tea Party hardliner would have loved that ceremony.

I love Jesus and my allegiance to him will far outweigh my allegiance to anything else. But spending the 4th with my oldest son and his wife, her family, and watching fireworks, along with meeting Pablo, I can easily say I love the 4th as well. It’s still a great country. It’s still a place of opportunity. There is still evidence of the DNA that was formed with this nation. It is still a great place to live.

Let freedom ring. We can return the angst tomorrow.

So, President Obama’s move to stop deportation on a certain segment of the population can be perceived in so many ways. Sure, we can call it pure politics. I would also say that inaction by politicians on Capitol Hill should be labeled the same way. This is something no one wants to touch.

What has ceased in this country is the making it a place of promise and opportunity. We’ve made opportunity into a political football.

Trying to help children who have had no say in where they live because they’ve followed their parents may be “political” in a year like this, but it may just be the right thing to do. Inaction to this point has certainly done nothing.

We are not about solving issues in our culture these days. This may not ultimately solve an issue, but is should give us the opportunity to talk about what is right for those who are on the margins.