There isn’t any kind of “debate” going on since the Parkland, FL, shooting. And let’s be real… as the Three Stooges would say: “WE’RE GETTIN’ NO PLACE FAST!” 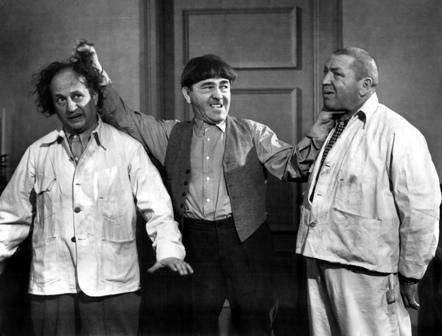 It’s also the week Billy Graham passed away. There are so many wonderful tributes to him. I highly recommend visiting Christianity Today’s page to read a lot of tributes as well as analysis.

There is also an excellent podcast with thoughts from one of Graham’s biographers, Grant Wacker.

But let’s talk guns as well as Graham. (When you’re done laughing or throwing something against the wall… come back here.)

David Brooks has not had a solid week in my opinion. He’s one of my favorite columnists because he will take time to look a bit deeper into issues. This week he did the same, but I didn’t want to do that, so I don’t like him as much. But THIS COLUMN is about giving people a chance… especially those shouting about gun rights this week.

It is never my goal to create my own echo chamber, listening or reading only those sources and opinions I agree with on any subject. Years ago, especially after the Columbine shooting, I really wanted to know more about the link between these types of people and what they were putting into their brains. I also did have a curiosity about mental health issues.

The “conservative” mantra this week has been, “Look at mental health!” (It’s a common mantra after most mass shootings now. So, at some point, I have to believe SOME Republican is actually going to do just that and come up with some workable solutions. I’m holding my breath.)

As with any kind of gun control law we could write up, dealing with “mental illness” won’t be as straightforward as we’d like, either. The Daily Podcast explores that difficulty with some depth on the Feb. 23 podcast. Give it a listen.

In other things that fed me and challenged me this week, I listened to a message from a local pastor in Minneapolis I have grown to admire. Dennis Edwards delivers a message on listening to those on the Christian margins to understand what it means to follow Christ. I really admire his knowledge, his depth of teaching, and his willingness to charge into tough subjects.

A few weeks ago I had something stir in me that I am still working on. We are in a period of serious upheaval and I don’t think we understand that or know what that fully means. History will probably need to judge this more, but I think 2018 puts us in a significant time of upheaval. I truly believe as Christians we can tune this in and see it and the Lord is speaking us to discern and act in KINGDOM power. We’ll have to see.

Basically, every 50 years since the end of the Civil War our nation has witnessed serious upheaval and it’s related to our serious inability to deal with race. I was thinking 1918, 1968, and now 2018. (I’m still developing this along with my “three gods of American culture” theory and I think they tie together. I’m just not ready to lay it out because the day I do it is the day this readership goes from the massive number of probably 10-12 to ZERO. I can’t take that kind of rejection yet. 🙂 )

Then I ran across this message from William Barber II and he extended it back to 1868 for me as well.

None of these reads are “easy” reads. None of these “listens” are “easy listening.” But we need some Holy Spirit agitation in our lives to stir us for these times. I truly hope you take some of this in.