END_OF_DOCUMENT_TOKEN_TO_BE_REPLACED

Mark 5:1-20 tells the story of the demoniac in the Gerasene region. What strikes me each time I read this story is the toleration the villagers had for the bondage this man was under and when he was actually made whole, they wanted Jesus out of the region.

They had “the devil they knew” and could “manage” the bondage at that point. At least, that was the lie they were working with day after day. Then, when real deliverance showed up, they had a power they didn’t know.

Too often we tolerate the bondage of the enemy because it’s somehow “known” to us. It’s “manageable.”

But when Jesus walks into the room… we can’t manage him. He sets people free, but HE is in control. We prefer the illusion of our own “management” skills.

This is a story that haunts me. Do I tolerate the activity of the enemy in my life or around me too much?

We are good at irritating each other. Liberals irritating conservatives, both Christian and political… and the return fire is done with equal zest.

But how about the REAL enemy?

He doesn’t mind if we think he doesn’t exist and we want to go with the mantra, “Evil is the absence of someone doing good.”

As a great professor of mine once said, “Some say there is a devil. Others say there is no such thing. Either way, he doesn’t care.”

I am reflecting on Luke 4, but have moved on past a week in the Temptation in the Wilderness. I am now reflecting on Jesus in the synagogue at Capernaum. Jesus is teaching and then a demon manifests itself through a man sitting there.

I am only reflecting lightly on this passage, but it is my estimation that the man was probably a regular attender of the synagogue. Jesus comes with authority, and the demon manifests. All those other times in the synagogue, not one leader with authority…

Is the presence of Jesus so real in my life that the enemy gets agitated when I’m close to something he’s held on to for a long time?

It’s time to live life on purpose and with power.

One of the notes I made on the passage in Mark 5 where Jesus heals the demoniac: “Don’t settle for letting people stay in bondage.”

Don’t give up. Don’t let up. Jesus had to deal with the demoniac to some extent because his name was Legion. There is indication that this conversation took a little more time than “normal” for Jesus. Yet, he stayed at it.

Don’t settle for bondage… in yourself… or others.

Mark 5:1-20 is the story of Jesus delivering the demoniac. The first challenge out of this story I posted here.

The second challenge I have is the response of the people.

14 Those who tended the pigs ran away and told the story in the city and in the countryside. People came to see what had happened. 15 They came to Jesus and saw the man who used to be demon-possessed. They saw the very man who had been filled with many demons sitting there fully dressed and completely sane, and they were filled with awe. 16Those who had actually seen what had happened to the demon-possessed man told the others about the pigs. 17 Then they pleaded with Jesus to leave their region. (Mark 5:14-17, CEB)

Loren Cunningham, founder of YWAM, had a great message I heard many years ago called, “Choosing Swine Over the Savior.” It was from this story, and I still think of that title every time I read this passage.

What is it that causes people to want a raving lunatic in their midst rather than the power of the Kingdom of God?

Perhaps it’s control. Even though the maniac was painful to deal with, they could manage that pain. With Jesus they came face to face with Someone they couldn’t manage. This Man had crushed demonic spirits. A lot of them.

What did that mean for them?

The people of the area feared change. They feared what they could not control, or at least manage.

Setting people free is messy and it’s hard work. Often we’re just not up for it. We like the manageable God we have come up with and any sense of something new can really put a jolt in us.

But people are bound. The gospel sets them free. And we are the instruments of change.

In Mark 1 there is the story of Jesus casting out the demon in the synagogue. While we focus on the power encounter, Mark focuses on the authority. Twice in the same story he mentions the authority of Jesus to teach.

22 The people were amazed by his teaching, for he was teaching them with authority, not like the legal experts.

27 Everyone was shaken and questioned among themselves, “What’s this? A new teaching with authority! (Mark 1: 22,27, CEB)

When we walking in the authority of the Kingdom, the enemy recognizes it. Jesus never went hunting for a power encounter. Power encounters found him.

The apostles never went hunting for power encounters. So it is with us.

When we are walking in the authority of the Kingdom, our priority is Matt. 6:33. Whatever happens after that is something we are truly prepared for. We need not worry or fear. The tools have been given.

When the people of God show up and are walking in authority, just know that sometimes that means the spiritual waters stir. Don’t seek it out specifically. And don’t shy away from it when those waters stir. 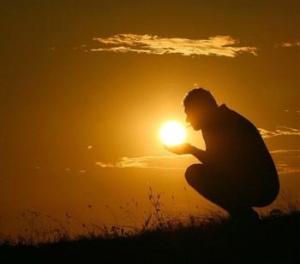